Which door is the safest ? Anti-theft with tamper-proof door.

Which door is the safest? Anti-theft with tamper-proof door ?

Anti-theft door tampering There are many types of doors to choose from. according to the usage of the residents Let's see how the shutters protect. How to be tampered with Choosing to use a glass door that is a safety glass It is the use of glass that is particularly strong, resistant to destruction, called Tempered Glass, 2 sheets are attached together and the intermediate is attached to each other with a film. When it is hit so hard that the glass is broken, the film will help support the glass from falling or falling out of our shutters. People can come into the house. strengthen Prevent being tampered with by adding a safety net safety netting Different from using a normal mosquito net that prevents insects from entering the house It is a screen that is resistant to destruction. Attached deep to the inside of the frame Hit it with a hammer or cut it with a knife. Is firmly attached to the frame with screws Even if it is smashed until the screen is rocked or twisted, it will not come off the frame of the door. Choosing to use shutters with wrought iron is another option that is also commonly used It is used to cover both the exterior and interior window panes. Even if you smash the glass until it breaks was unable to enter the house At present, shutters are made with wrought iron attached to the frame of the pane. Resulting in better protection against tampering with the removal of the wrought iron to enhance the safety of the home Current sliding shutters Both normal, safe, or wrought iron There will be installed together to lift the door hidden inside the frame. in order to prevent being lifted from the outside The fact that there is a built-in stopper must use a screwdriver to tighten it from the inside only to be able to lift the panel out. In the event that you want to clean or repair, you must remove the lifter before you can lift the door. Next is the selection of sliding doors and windows with wrought iron and double glass. It is a sliding window with double glass and wrought iron in the middle. It's also a UV cut type. Helps people in the house feel cooler. even on a sunny day

When choosing shutters that are designed to prevent breaking and being resistant to destruction, which door is the safest? It is up to you to choose according to your preferences according to the decoration of the house. and use by residents 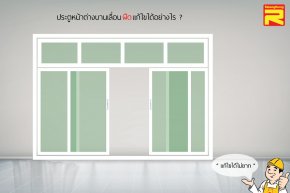 Liding Doors and Windows are stiff, How to fix it ?

What is the benefit of UPVC sliding windows ? What is UPVC ? 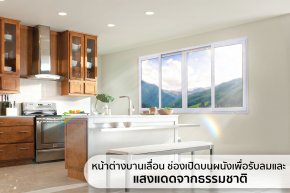 How many types of sliding windows are there ? Choose one to suit your home.

How to properly install aluminum and UPVC sliding doors and windows